Kim Parker and Rakesh Alcourt are undead, but running for their lives. When the vampire Kronos unleashes a virus to depopulate humanity, and starts by killing her, Kim is sucked into a nightmare world of running and hiding. She's not sure what she is anymore; she just knows that her love for Rakesh is boundless.

Rakesh saved Kim's life, but now the clock is ticking. Soon Kim will sink into unconsciousness, and either never wake up, wake up as a monster, or wake up fully transformed. But whatever Kim needs, Rakesh will provide. Turning her into a vampire was a selfish act. Rakesh never gave her a choice; he simply could not face a life without Kim. And now, Kronos is hot on their trail. As each one of Rakesh's safe havens prove to be corrupted or steeped in catastrophic betrayal, he must descend into hell to save Kim. 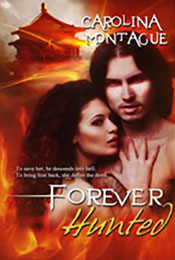